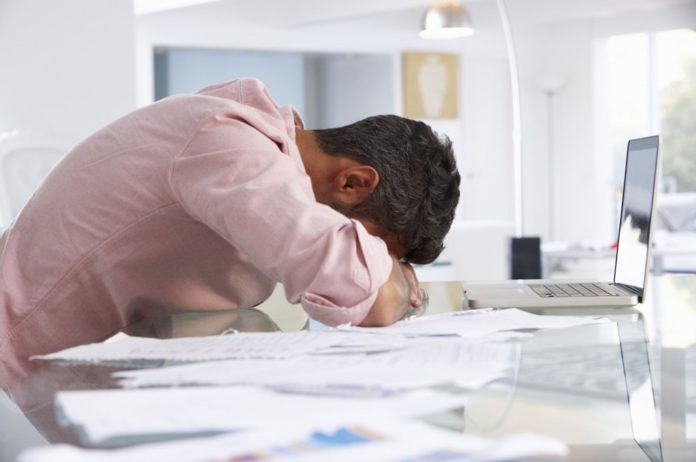 Work fatigue is a problem that appears in people as a result of prolonged, intense and / or repetitive work. It is presented as a decrease in work performance and a permanent feeling of fatigue. There are three types of work fatigue: the perceptive, the physical and the psychological.

It is, basically, the fatigue that appears when using the senses in excess. In most cases it is about the auditory and visual senses. This is the fatigue that can suffer, both workers who perform in noisy environments (construction sites, nightclubs, to name just two), and those who do office work where they are required to spend hundreds of hours at month looking at the computer monitor or mobile phone.

These names refer to the type of fatigue that occurs in jobs where employees perform tasks involving great physical effort, such as the movement of heavy objects.

As explained by specialists, this kind of fatigue is caused by the loss of energy reserves (such as glycogen and phosphocreatine) in the body, the displacement of electrolytes and the decrease of hormones.

There is a classification that groups the different degrees of muscular or physical fatigue: acute fatigue is what appears during a session of intense physical activity. Subacute fatigue, which occurs as a result of several of these consecutive days. A variant within these two is the so-called over muscular effort, which usually occurs as a result of a physical effort that exceeds the capacity of the muscles. Finally, there is chronic fatigue, a consequence of the lack of recovery of the muscles over a considerable period of time, thus generating a systematic problem of fatigue.

This type of fatigue consists in the diminution of the mental abilities and it is a consequence of the prolonged repetition of the same activity. The human mind, in order to function healthily, needs alteration, of the possibility of variants; When the same activity and the same thought mechanism are repeated for long hours, days and months, the brain is affected.

How to avoid it

The most sensible ways to avoid work fatigue are: work at reasonable times, take the necessary breaks, get enough sleep and eat healthy. It is good to remember that an employee who suffers from work fatigue is the main harmed in the situation, but this situation is still a problem for the employer. An exhausted employee is more likely to suffer an accident, make mistakes and have mediocre work performance.

There are several points in common between work fatigue and laws. For example, due to extreme tiredness, after working on the same systematically, our body suffers and loses effectiveness. This situation can have as a consequence accidents at work, whether you work in a restaurant, in construction, or in an office.

In case you have the suspicion or are convinced that you suffer from work fatigue, you may ask yourself: are you working more hours than your body can resist? In that case, is your employer paying you for overtime?