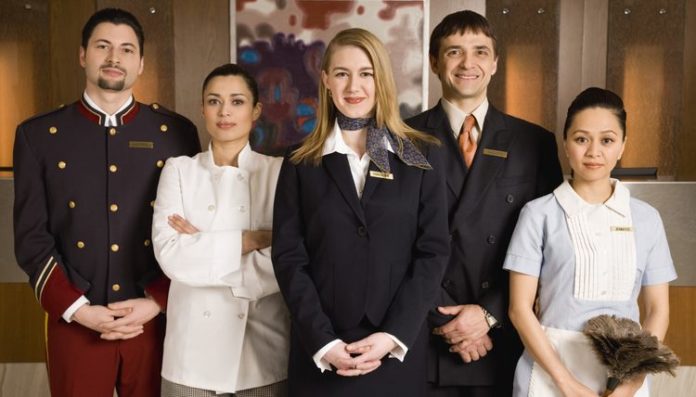 Those who have been employed in the hotel industry know that work there is not simple, but rather a rather demanding job. A person in charge of the cleaning or housekeeping service , for example, is responsible for about 16 rooms per shift, and in each of these rooms it is their duty to make the beds, order the space, polish the toilets, wash basins and mirrors, wash the floor and vacuum.

According to the American Association of Hotels and Accommodations * (AHLA, for its acronym in English: American Hotel & Lodging Association ) there are about 53 thousand hotels or accommodations in the United States. And according to the Department of Labor (DOL, for its acronym in English: Department of Labor), more than 22% of workers who perform work related to tourism and hospitality in the country, are of Hispanic origin.

Risks of working in a hotel

At first glance, a hotel seems a safer place to work if compared to a construction site or a factory. However, Repetitive Movement Injuries are quite common among hotel workers, which we will call RMI by its acronym in English: Repetitive Motion Injuries

These movements occur in many other jobs, and they are a silent enemy that little by little we wear out until one day, without having done anything differently, our body can no longer and we suffer an injury

Among the activities most at risk of suffering from RMIs in hotel work, we can mention:

This is why it is so important and necessary to rotate shifts, take breaks, work as a team and receive adequate training in order to prevent IMR. If you feel that your employer could do a better job of offering you safe conditions, you can make an anonymous report to OSHA (Occupational Safety and Health Administration) here , so that an inspector can analyze the situation of the place and make recommendations so that your center of work be more secure.

Labor rights of the hotel worker

The Fair Labor Standards Act (FLSA ) establishes two scenarios under which its rules apply when it comes to hotel workers: one focused on the characteristics of the company and the other centered on the employee.

The company-based approach means that if the company invoices $ 500 thousand or more per year, whether it has only one or several establishments, and has at least two employees involved in trade or in the production of goods for its business or management of these assets, then all workers of that company are covered by the rules of the FLSA.

The other criterion has to do with the way the company does business; an approach that applies even if the company bills less than $ 500,000 a year. If the company participates in interstate commerce or produces goods that will be marketed outside the state, the FLSA protects the worker. The interstate commerce includes transactions with credit cards of other states, something that happens in many, or, we could say, in the majority of the payments that the hotels receive on the part of the guests that arrive from different places.

What does the FLSA require?

The FLSA establishes a series of basic rights for workers protected under its rules, which must be met by employers. Among the main regulations, it is worth mentioning:

Workers who qualify for FLSA protections are entitled to receive a salary of no less than $ 7.25 per hour. Salary payments must be made on the agreed payment day according to the payment schedule. It is not legally allowed to make discounts on payments for uniforms if this reduction means that what the worker receives is below the minimum wage or affects the additional payment due to extra hours. If your boss violates this right, you should talk to a lawyer today.

When a hotel employee works for more than 40 hours in a week , they are entitled to 1.5 times their payment per hour for each additional hour after 40. If the employer omits these payments and / or looks for ways to escape this responsibility, is incurring in an illegal practice that could be brought to court with the appropriate legal help.

The FLSA recognizes them when an employee receives more than $ 30 a month in tips. The employer has the option to avail of a tip or tip credit in English, which allows him to pay less than the minimum wage provided that the tips received by workers compensate the difference

If the employer decides to use the tip credit , he must inform the employees in advance, specifying the amount of tips that will be considered credit and ensure that the employee receives no less than the minimum wage when adding tips and payments from the employer.

Except in cases where employees participate in a ” tip pool ,” workers must keep all of the tips they receive.

The Workers ‘ Compensation or Workers’ Compensation in English, is insurance paid by employers to ensure that workers receive compensation if an accident or injury occurs in working hours

The Workers Comp can cover medical expenses, recovery therapies, lost wages, pain, suffering and emotional stress, depending on the type and severity of the injury suffered by the employee

If you hurt yourself working, a Workers Comp claim may be your best option, since it does not make it necessary to establish blame or speak with a judge. You only need to file a well-supported claim with the help of a lawyer before the relevant state authorities. Once your application is approved, you can receive the benefits according to the type of injury you suffered.