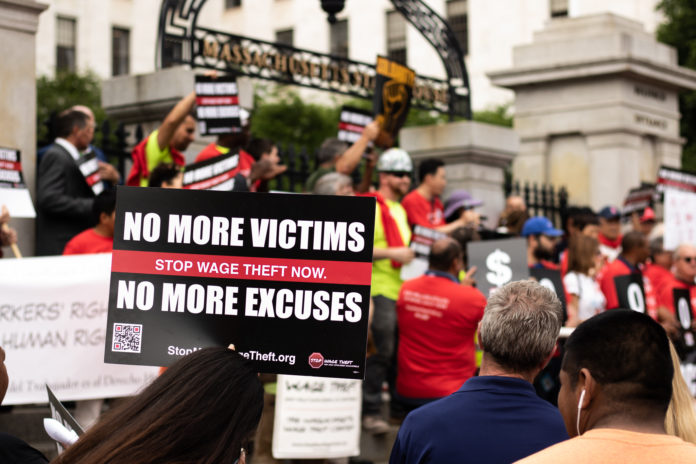 Among the many things that Hispanics contribute in this country, highlights our commitment to work. We are willing to always give the extra and make more desire than anyone to be able to progress and offer a prosperous future to our families. Unfortunately, many employers take advantage of this and seek to take advantage by trickery to pay us less than we really deserve.

Many workers, for fear of reprisals or fear of losing their jobs or getting into more trouble, let this happen even knowing full well that it is not a great injustice. However, every worker in this country is entitled to full payment of hours worked, and the law has ways to protect people from abusive employers. In this post we explain some common ways of wage theft and how you can defend yourself if you are a victim of this outrage.

What is wage theft?

Wage theft is any strategy or ruse that results in an employer not paying an employee the money that corresponds to him as he pays for the work he has done. There are several types of wage theft and some even go unnoticed. Among the forms of wage theft we can mention:

Do not pay extra hours

This standard, however, is subject to a number of conditions. And many employers take advantage of the lack of clarity and ignorance of many employees to put into practice tricks that allow them not to pay these hours accordingly. In a previous post, we clarified some of these concepts to better understand when we have to pay extra hours.

When two parties place their signature on a contract, it has weight before the law and must be respected, since otherwise, you can get to the court, where a judge can take drastic action, such as enforcing the contract, order that compensation be paid or even dissolve the contract if the magistrate deems it convenient.

However, many employers assume that their employees do not have the resources to defend themselves legally or that the need to keep their job will discourage them from defending their rights as established by law, and they decide to ignore the parts of the contract that do not they agree or that they represent greater costs.

If you have a signed contract and have evidence that the other party is not in compliance with the agreement, you can take legal action.

Payment less than the minimum wage

In many businesses, however, employers do not respect this rule. In several restaurants, for example, the custom of receiving tips is used to "compensate" the fact that the employees of the establishment earn less per hour than the minimum wage, as we said in another post. Since there is often no record of the people who work in the restaurant, it is even easier for the employer to not respect the rights of the worker, flagrantly violating the rules established by the FLSA.

Withholding of payments as retaliation

There are dishonest employers who, in the face of a complaint or complaint to the authorities by a disgruntled employee, try to intimidate or punish the worker and punish their colleagues by withholding payments. This is absolutely illegal and a lawyer can help you not only to recover unpaid wages, but also to have your employer compensate you for all the complications resulting from not having paid what you are entitled to on time.